Okay, this one got away from us a little bit. The release is absolutely chock-full of new features – hopefully there is something for everyone!

brainCloud now supports assigning permissions to Team Members on an app-by-app basis. The roles available are pre-defined (we don’t offer custom roles yet), but we’ve taken considerable care in defining a flexible set of roles based on customer feedback. And of course, you can combine roles to meet your needs. 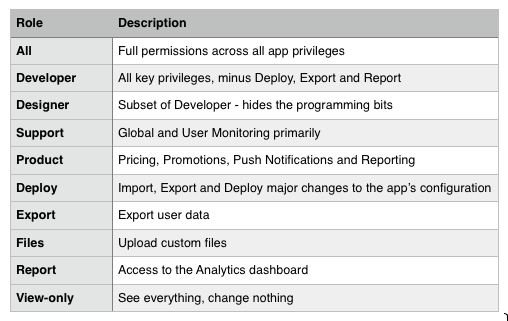 Roles are assigned via the new Administration | Permissions page, which is accessible by Team Administrators. You can view the individual privileges that make up each role via the Roles tab of the page.

While we were implementing our permissions system, we decided to go one step further, and implement an extra level of protection for Live apps. The result is our new Live Lock feature, which ensures that you don’t inadvertently edit the configuration of your live app, even if you have the privileges to do so.

Our new “App is Live” banner will display on the portal pages for live apps, and will prevent the app from being modified without the user first unlocking it. Once unlocked, the banner turns yellow as a warning to be careful. Apps remain unlocked for the duration of your session – so it won’t unnecessarily affect your workflow.

As you might expect, brainCloud has seen an uptick in new sign-ups due to the Parse shutdown. We’ve received great feedback from our new arrivals, who find that brainCloud not only matches Parse’s featureset, but truly offers a whole lot more.

In an effort to be extra welcoming, we are pleased to roll-out Phase 1 of brainCloud’s Parse Migration support – which allows for easy importing of Parse data into our Cloud Data system (as Global Entities). This facility is especially useful for teams that had Parse apps in development, and want to quickly import their data and keep moving forward with a brainCloud-based implementation.

This is just the first step of our plan to assist customers migrate their apps from Parse. Stay tuned as we add additional features in the coming weeks, and be sure to fill in our Parse Migration Survey to ensure that your requirements are heard.

The new system is in beta, and the examples focus primarily on C# for now – but we think it’s already better than the old reference documentation – so we’re releasing it early. Going forward, our overview and tutorials will remain under the Docs header, with service and method references in the new system under API.

Let us know what you think! Check out the new docs here!

We’ve totally refactored our Apple libraries to work better with Swift and Objective-C, and repackaged them using CocoaPods to make them easier to integrate into your projects.

There are two CocoaPod libraries available:

You can find more information on using CocoaPods in your Xcode project in their Guides section.

The following changes have been made to the Design Portal:

There have been significant changes to the error handling and communication subsystems in several of the libraries. We recommend that you test well before updating clients in the field.