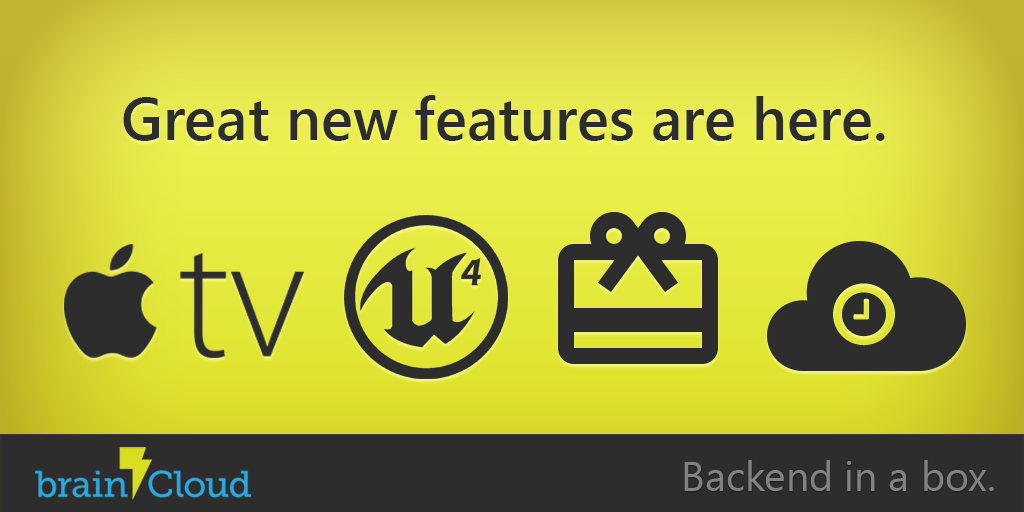 Key features in this release:

Those are the biggies, but there are a bunch of other changes and improvements in this release. Read on.

We’ve made some enhancements to how the brainCloud Server and Client libraries work together to communicate error information.  Specifically, we’ve enhanced the <statusMessage> parameter for the error callback method to contain not only the textual message associated with the error, but actually the entire json result of the error.

This allows us to return more detailed error information, whose structure may vary on an operation by operation basis.  For example, if authentication fails because the client app’s version is obsolete, the returned error information can include a link to the app in the appstore to use to perform the software upgrade.

If by any chance your client app was parsing the <statusMessage> – most apps weren’t, because it wasn’t very useful – you can still get the old data by referencing “statusMessage.statusMessage”.  Or, you can turn this new behaviour off using the BrainCloudClient.SetOldStyleStatusMessageErrorCallback() method.

In addition, we’ve unified our rewards processing to invoke a standard Rewards Handler whenever rewards (achievements, xp, milestones and quests) are awarded from one of the many APIs that do so (i.e. authenticate, increment stats, stats event, etc.).  You can now hook into that single handler to splash Achievement Unlocked onto the screen, Quest Completed!, etc…  instead of duplicating that functionality across multiple handlers.

As part of this change, brainCloud no longer automatically triggers the associated local platform Achievement.  This platform-specific code was causing porting issues as we continue to expand the list of devices that we support. By centralizing the error handling it becomes very simple for the client apps to integrate what is in most cases a single line of code to trigger the local achievement.

To register for the new Rewards Callback, call RegisterRewardCallback() in your local library.

Additional improvements to this release:

When we first added Cloud Code support, we envisioned folks using it primarily for optimizing their client-server calls, and/or implementing sensitive logic on the server. For that sort of usage, our standard 10-second watchdog timer made sense.

But then we added support for Scheduled Cloud Code jobs – and you guys blew the doors off our Cloud Code usage scenarios! All of a sudden folks could schedule daily, hourly, etc. scripts – and some of these scripts were making hundreds and even thousands of API calls when they run.

It didn’t take long before folks started to hit the 10-second watchdog timer, which kills your script if its still running when the timer expires. The watchdog is there to ensure that our server doesn’t get hit by javascript coding errors (think “infinite loops!”). Needless to say, it’s an important part of ensuring that our servers remain safe and reliable when executing custom scripts.

In the short-term we had to raise that 10-second timeout globally across the system to keep some of our leading clients apps running properly.  We’re pleased to have our long-term solution in place now – which allows developers to set a custom timeout value for their individual scripts.  All new scripts will default to 10-seconds – but you can individually raise the timeout as high as 60 seconds.  Note – if required, it’s possible to raise it even higher. Just message our team to have them raise your limit.

As you know, the power of cloud code is that combining a collection of API calls together into a single cloud code script performs better than making the calls individually from the client – and also taxes our servers less – so it’s win:win. The new formulas for counting API calls under Cloud Code take this into account, and provide a fair balance of cost to the developer (you) and covering brainCloud server utilization (phew!).

The updated rules are as follows:

If your app makes moderate use of cloud scripts, using them to string together common server requests (e.g. making a combined call to post a score, update player stats, and update a user entity describing the player’s progress) – this pricing update likely doesn’t affect you at all.  This includes the great majority of our customers today.

This new strategy allows our customers the flexibility of running much more ambitious Cloud Code scripts – at a greatly reduced cost per API call invoked.

If you have any questions or concerns, don’t hesitate to contact us through the support messaging system.