There are a ton of small enhancements and fixes in 2.22 – plus these three big things:

Until now, brainCloud has relied solely upon Facebook for managing a user’s friend relationships. Apps that didn’t want to connect to Facebook were left to implement their own system (via Cloud Code and User Entities). It’s work-able, and some of brainCloud’s best apps have taken this approach – but we thought brainCloud should do more for you.
Release 2.22 adds a new built-in friends system that is directly manageable by the app – while also dynamically merged with network sources (i.e. Facebook and others in the future) if available. This enables apps without Facebook integration to still have friends, and leverage friend-dependent features such as Social Leaderboards.
You’ll find the new API methods in the Friend service, as well as a new Monitoring screen for viewing a list of a user’s friends.

Last month we delivered our Parse import feature. This release we’ve added the ability to connect to Parse Servers from live brainCloud apps – facilitating the gradual migration of functionality and user data from Parse to brainCloud.
Configuring the Parse connection is simple – go to Design | Integrations | Manage Integrations, and enter your Parse App ID and Reset API Key. You can even enter a custom Parse Server URL if you’ve already migrated from Parse’s servers.
From there, there are two key APIs to integrate into your app:
We’ve even built a small sample app to show how these APIs can work together to dynamically migrate your users to brainCloud.

We think our CloudCoders will like this one. We’ve added a new Run tab to the editor, so that you can do the full develop, run, debug cycle from within the Cloud Code editor dialog. No more saving and exiting to the API Explorer – only to have to go right back to editor once the system hits that pesky defect!

Now edit, test and debug your code all from the same editor! 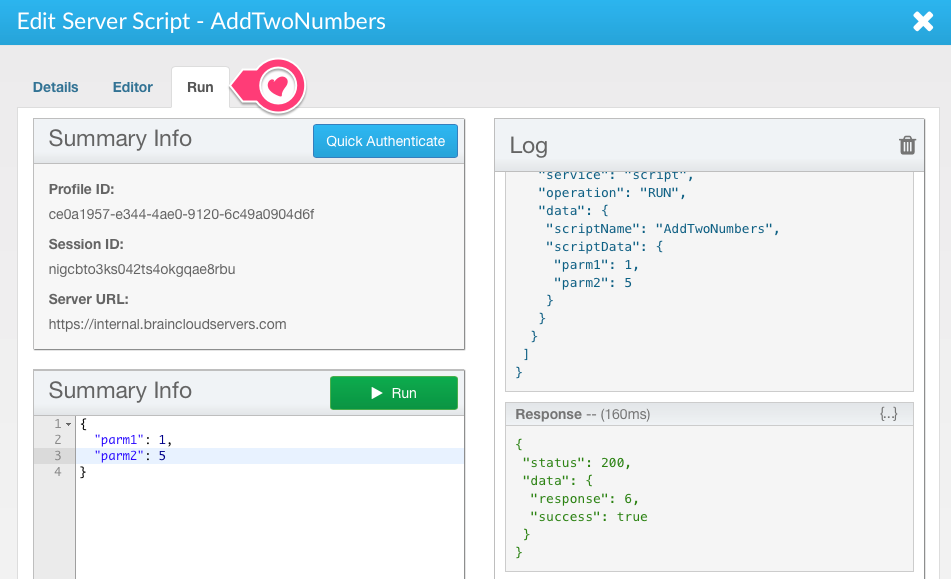 Pro tip: The session and log for the Run tab are shared with the API Explorer. This allows you to set up custom scenarios for testing.

The following changes have been made to the design portal:

The following changes have been made to the brainCloud API: