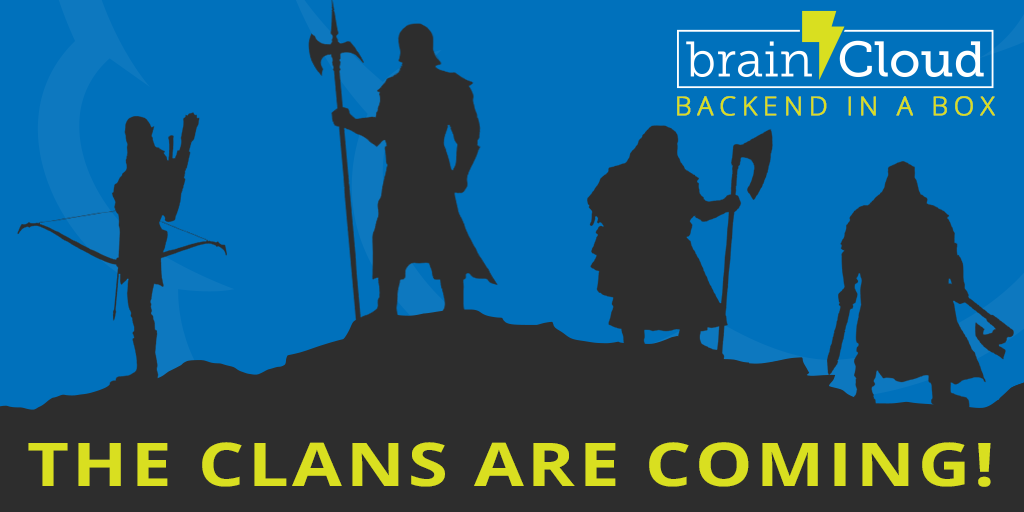 Plus the usual assortment of API and library improvements. Note that all client libraries have been updated to the latest, except Javascript, which will be updated and released mid-next-week (week of Friday May 18th).

Read on for all the details.

Although you’ve always been able to write your own clan system in brainCloud using Global Entities and Cloud Code, we thought it was about time that we lent a hand – reducing the coding burden, and adding great tools support at the same time.

This feature provides an API that allows users to dynamically create, join and manage Groups.

Groups have the following characteristics:

brainCloud’s Two-Factor Authentication (2FA) support allows you to tie your phone to your developer account for extra security and peace-of-mind.

We’ve chosen to use Twilio’s Authy technology for our 2FA implementation – it works similarly to Google Authenticator, but gives more options in terms of authentication (text, voice, or app) and offers better management of verification devices.

Hooking up 2FA to your account couldn’t be simpler: 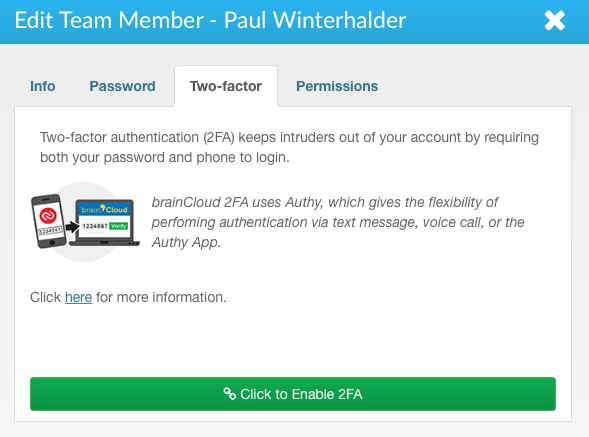 For more information, refer to the Enabling 2FA page in our documentation.

Through the magic of scheduled cloud code and our push notification API, it’s always been possible to schedule push notifications to happen at a precise time. But – what if you want to send notifications to a segment of users, and ensure that those notifications get sent at a standardized local time – say 9am, for each of the users, regardless of their timezone? That was much, much harder.

It’s extremely powerful, and very simple to use. Check out the new S2S API calls here.

With it’s recent acquisition by Microsoft, and integration into Visual Studio, we’re finding tons of interest in Xamarin support for brainCloud. We’re pleased to announce the availability of the brainCloud Xamarin.ios and Xamarin.android libraries!

Apple has announced that moving forward, all new and updated watchOS apps must be native. We are here to help, so we’ve built a new version of the brainCloud library that runs natively on watchOS 2. You’re welcome!

The first thing you will notice is that we have re-ordered the tabs of the Design section of the portal to be mostly alphabetical (we still kept the Core App Info section at the top). We’ve added (and continued to add) so many features to brainCloud, going alphabetical seems like the only way to keep things easily findable.

In addition, we’ve made the following portal changes:

The following additions / changes have been made to the brainCloud API: