We are pleased to present release 3.6.5 – just in time for the holidays!

Note that there are some breaking changes in the client libraries – but they are pretty simple to accomodate, and of course will not affect your app until you update. For more details, see the Refactored Client Libraries section below.

We have added a new expiry feature to keep your matchmaking fresh. It is implemented via a nightly process that will disable the matchmaking flag for users that haven’t logged into the app within the specified number of days.

Enabling this feature will ensure that players don’t get matched with opponents who haven’t recently logged into your game.

A common customer request has been a way to iterate through the population of an app’s users, performing some operations on each user’s account. It has taken some time to find a proper way to do this that is scalable and safe – but we are pleased to announce that the first evolution of this is now in place.

We have introduced a new S2S Script Service method called RunBatchUserScript(). This script can be called via the S2S Explorer or from an external server – and queues the specified script to be run against each of the users in a app (or optionally, against particular segments). Although the RunBatchUserScript() is triggered from the S2S context, each individual script is run in the context of the current player – so it is as if the script was called by that user’s logged-in session – greatly simplifying the script code.

Here’s an example script that writes a global entity (singleton) for each player it is run upon:

You can call it via the S2S Explorer like this: 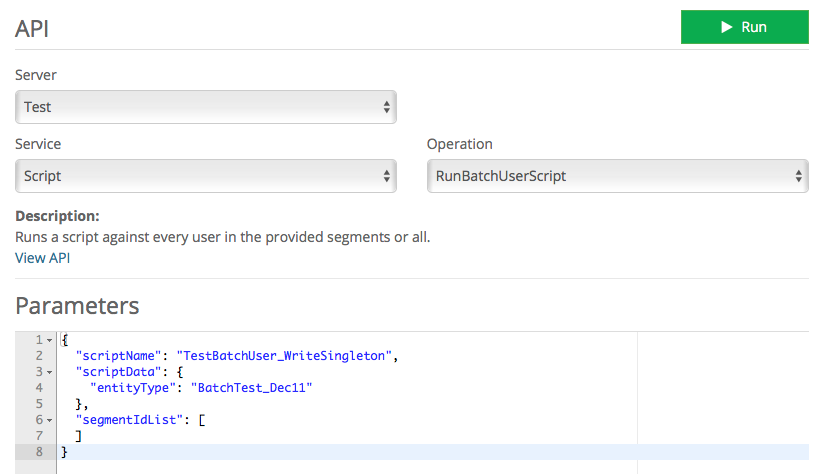 Note that the scripts get queued to run on the users in the background – and depending upon the app’s population may take several minutes or potentially several hours to complete.

The brainCloud client libraries have been refactored for greater simplicity and flexibility. Key improvements with these changes are:

The key change that allows this is the deprecation of the singleton behaviour of the brainCloud client libraries. As you may or may not know, for convenience the brainCloud client libraries declared singletons for both the BrainCloudWrapper and BrainCloudClient library classes. This provided a bit of convenience for developers – but at considerable costs to flexibility (and frankly, some code readability issues). We are hereby deprecating this behaviour.

For comparison – here are what two calls to the leaderboard API look like – before and after this API change:

These improvements mean that some client code has to change – but the changes are pretty simple, and we believe well worth-it (see below).

Existing apps have the following options available to them:

We highly recommend that new apps use the new paradigm – your code will be simpler for it.

For more information, see our blog post with the full details and rationale.

We’ve made the following portal changes for this release: