As you know, we are continually measuring, tweaking and improving the performance of brainCloud.

The good news is that the latest round of platform optimizations had a greater impact than expected – meaning we can handle even more users on our servers at lower cost.

The even better news is this means, effective immediately, we’re adjusting our pricing tiers downward.

This is part of our ongoing pledge to align brainCloud pricing with our costs, to ensure we’re offering you the most cost-effective solution possible. 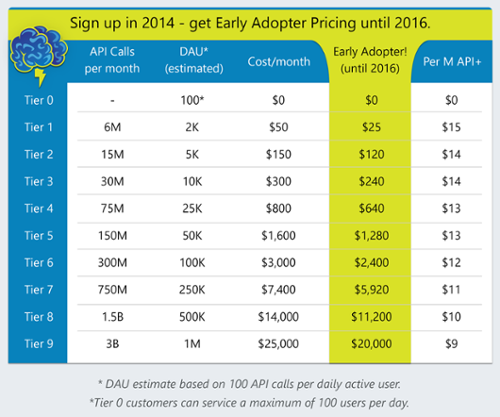 While delivering the good news, we thought we’d spend a moment to provide a bit more background on brainCloud’s pricing model.

brainCloud pricing is based on API Usage – which is the number of API calls (requests + responses) that your app makes to our servers.

We choose API Usage because:

Of course, it does have the disadvantage that unlike DAU (Daily Active Users) or MAU (Monthy Active Users), API Usage is not a term that most developers and business people are used to talking in terms of.

brainCloud API usage is dependent upon:

For shorthand, we can use the following formula:

So – for example, if we were estimating the montly cost of a game with:

The API Usage per DAU in brainCloud varies by app – but averages ~100 API Calls per DAU.

Some competitors quote an average of 200 or 300 API calls per DAU – there are 3 main reasons for this discrepancy:

We hope this clears up any questions you may have about pricing in brainCloud.

As always, brainCloud is free during development (up to 100 users), and if you sign up before March 6th, 2015, you lock in our special Early Adopter pricing until 2016!